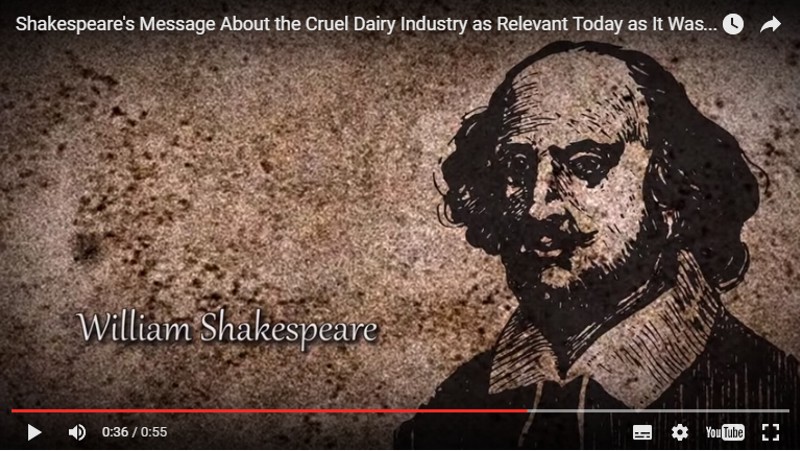 Thou never didst them wrong, nor no man wrong;
And as the butcher takes away the calf
And binds the wretch, and beats it when it strays,
Bearing it to the bloody slaughter-house,
Even so remorseless have they borne him hence;
And as the dam runs lowing up and down,
Looking the way her harmless young one went,
And can do nought but wail her darling’s loss.

No meat, please. Shakespeare was a promoter of the value of vegetarianism and veganism since 1600.

It was uncommon then to be a vegetarian in the 1600, since he adhered to a vegetarian diet.  It was generally believed that 400 years ago that eating meat was an uncommon habit. In Shakespeare’s time he promoted more a vegetarian lifestyle which was considered more healthy than ordinary diet.

Over the past 400 years, meat consumption has increased and millions of animals have being killed. Nowadays, global worldwide meat production has tripled and its consumptio has incredibly increased in recent decades.

Nowadays, it needs to show more simpathy than in the past, exactly as Shakespeare did. But, of course, simpathy can’t be shared by everybody.

Shakespeare’s veggie quotes are great quotes. It’s interesting to see how vegetarians and vegans from years and years ago have continued promoting their values until most recent years.

Shakespeare started promoting this values more than 400 years ago, but nowadays what really counts is to concretely transform our thoughts into real actions!