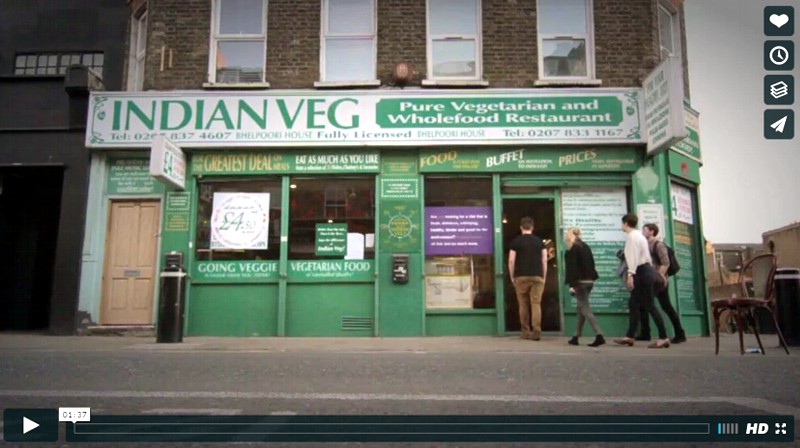 There are really good reasons to have lunch or dinner at the Indian vegan restaurant. The array of vegan dishes is admirable. Twice a week, on Wednesday and Friday, they serve a traditional Indian dish, the “paneer curry”.

The all-you-can-eat buffet costs only 4,5 pounds, a very special price, indeed, in London. In this restaurant food is of good quality, and your dish are cooked freshly. This restaurant offers impressive Indian-style vegan dishes and there are a wide range of Indian spices and curries that come in vegan varieties.

For people visiting London, this is home to go for vegans and vegetarians. This restaurant is recognized as new and exclusive in presentation. If you are looking for a great oriental atmosphere, this is absolutely the right place to go! You can easily get there by bus or by underground. In the restaurant, the walls are covered in posters with Indian representations of culture and even healthy cuisine. There are also many quotes by different people who tried to become veggie alone.

There are actually 30 kinds of different dishes to enjoy. Most of them consist of vegan course and tasty sauces (you can choose a wide range of flavor). Many people have eaten in this restaurant and they say it has to be tasted to be believed!

Indian Veg is the precursor of Indian vegan cuisine, when probably in Italy nobody have never heard about it, since 1985. although it should be said that Indian food is mainly based on vegetarian courses. Another thing that it is to be said is the wide range of beers available in this restaurant, for those who like to dine while enjoying a good beer.

If you are going to visit London, I recommend to eat in this restaurant. It is actually a good option for those who wants to spend not much and eat as much good food as you want.